September 11 was Keystone's first Home game for his year and they took the extra effort to pay tribute to our first responders- which was most appropriate. But it was also Wyatt's first football game and halftime show. He enjoyed the 1st quarter. Slept through the 2nd. Enjoyed 1/2 time and watched 3rd quarter. Then Gary and Wyatt headed for home. 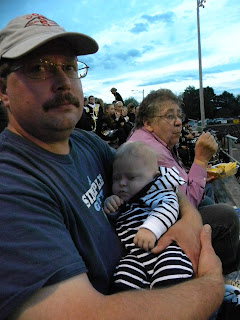 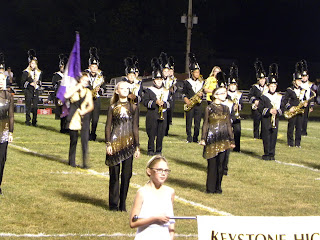 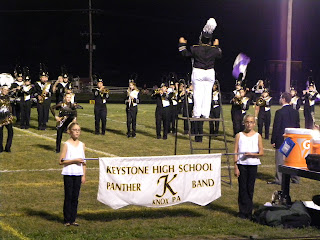 Posted by Schick fun ideas at 12:30 AM No comments:

I thought long and hard about my children's sermon for Father's Day. And then I decided that I would take a look at what Dad's do and here is what came from that. I did have to think about the occupations of our congregations men and then find a few titles that would fit some of God's jobs.

As the children came up I greeted them and asked if they knew what day today was and if they had a good time at Vacation Bible School (it had just been the week before). I asked them if they could help me as I had some questions for them- they said that they would help. I asked them to raise their hands if the answer was yes. So I asked how many of you have a Daddy that's a professional artist? They looked at each other and no one raised their hand. Hmm I said, well let's try this- Who's Dad is a shepherd?- once again no one raised their hand. (I did have one ask if a farmer counted? I asked did he have sheep?- Nope was the answer and I returned with well I guess not) So then I asked who's Father was an engineer- you know the kinds that design plans for roads or bridges or buildings? once again no hands went up. Hmm .. I have a few more, but I was getting confused.  How about a Horticulturalist? (I had to explain a professional gardener) Once again no hands went up. How about a Zookeeper? No hands there. Maybe a Weatherman? Nope. A Composer? Nope. How about a Lifeguard? Still I didn't have any hands go up. One more - How about a Doctor? Not with this group of kids.

So then I said to the children "What if I told you your Father was all of those? Would you believe me? "And so I started to explain that yes today was Father's Day, but how often did we remember God on Father's Day and the many things he does for us? So let's look at those job titles again. IS your Father an artist?- of course who else could paint the sunrise and sunsets so beautiful or create such wonderful flowers. IS your Father a shepherd? - Of course because we are the sheep of his pastures. Is your Father an engineer? Of course he is who made the plans for the World and the Ark? How about the Horticulturalist? Well let's start at the begin and look at the Garden of Eden- must have been good with plants. Is your Father a zookeeper? Who else takes care of the wild animals? Is your Father a Weatherman? Yes actually he is better than the weatherman he gets it right and he controls the weather. Is Your Father a composer? Yes- just listen to the birds or the crickets or the bullfrogs- who else can create that beautiful music? Is Your Father a lifeguard? Yes He is saving lives every day by having people believe in him and giving them eternal life. Is your Father a Doctor? Yes he is the Great Healer of all.

So as we think about Father's Day let's remember to be thankful for our heavenly Father who is always with us and is pretty talented too!
Posted by Schick fun ideas at 12:24 AM No comments:

This year was a very exciting fair as it was Garrett's first "real" year as a 4-H'er. but it was also difficult with Wyatt and trying to figure out how things were going to work, but everything worked out great! We had a fair week without rain which was a blessing all in itself, the New livestock barn was completed for the opening day of the fair, the boy's goats were in the new barn(which they thought was really cool) and on top of it all they both did REALLY Well!

For Garrett's first year- he hit a home run. He entered 4 projects and placed on all of them. He received 1st place on his Woodworking project, 2nd place on his Small Engine project, 1st Place with May (his breeding meat goat) and 1st place, Grand Champion, and Jr Showman with his Market Goat- Pickles! What a way to start his 4-H career- I'm not really sure how he is going to follow that next year, but look out because he really liked spending time with his animals and then reaping the rewards!

Robert also did really well this year. He entered his lawn tractor as a display for his Small Engine project and received 1st place on it, he finally got to pull his tractor in the garden tractor pulls and it did respectable and he placed 4th with Mighty 4(his market goat), but he earned Best Bred and Owned Market Goat. Robert also had Missy- his breeding meat goat which he goat a 1st place with.


Small Engine Project
And then there was Wyatt- who spent the whole week at the fair in the camper and was passed around through the fairgrounds to our "extended 4-H family members." I'm sure that this is just the beginning for Wyatt and he will be there for many years to come.

We had an added treat of having Gary at the fair all week too! He usually is working through the fair, but it worked for him to have off this year- which was very nice!

So 2015 4-H year is coming to a close and the boys did well and I'm very proud of their accomplishments and I'm holding my breathe as I wait for the plan for next year!

Posted by Schick fun ideas at 12:01 AM No comments:

It's hard to believe that Garrett turned 9 this June, but it's true! We celebrated his birthday over a couple of days. On his "real" birthday he selected his "favorite" meal and we had Wings and fries. Now I knew that we were having a family get together so we had Banana Splits with candles on his birthday. Now while we were eating his birthday meal the power went out so we ate dinner by the light of the Coleman lantern, but they came back on:) 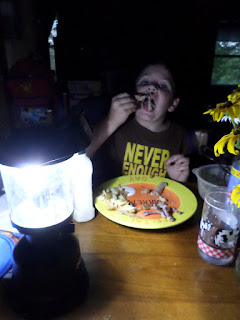 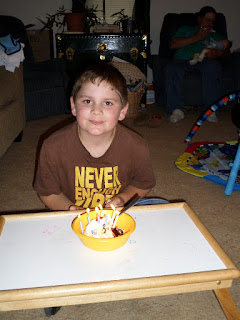 A few days later, when the weather was nice we had family come over and had a cookout and Cake and ice cream. He wanted the theme to be dirt- check out the "dirt" cake that Nanny made for him this year! 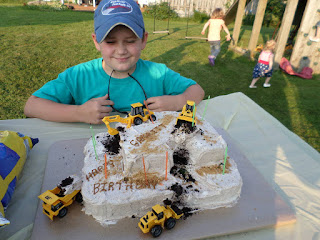 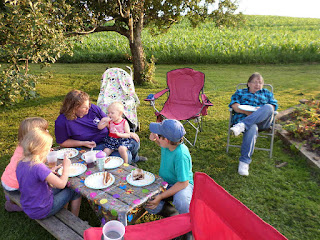 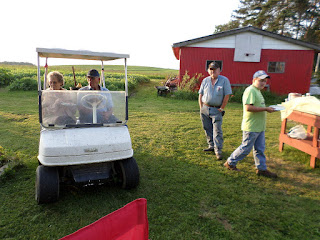 Happy 9th Birthday Garrett- Hope it was a great one:)
Posted by Schick fun ideas at 2:41 PM No comments: