Well yesterday was the first day of school and it was a bit different as Robert started Jr. high and was on the early bus. This will be the first year that Garrett gets on the bus by himself. Both were ready to start and all seemed to have a good day! I ended up with all the homework last night!:( 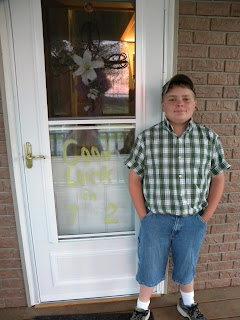 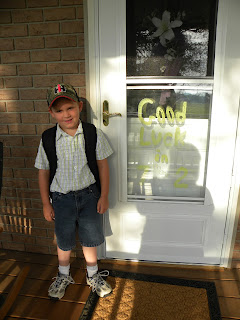 Posted by Schick fun ideas at 8:56 PM No comments: 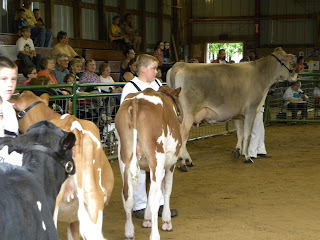 Well, almost a month has past and we did manage to get everything ready and to the Venango County Fair. Robert & Garrett showed their meat goats on Monday, Andrew showed his pig on Tuesday (while Robert was at band camp) and Andrew showed his dairy beef, then they were all busy getting ready for the Dairy Show on Thursday. As for placings well they all did well, Robert was 4th place 4-H show for Meat Goats, but Garrett beat him in the Open Show and took 4th while Robert was in 5th. Robert was the reserve Jr. Goat Showman and that was quite the competition. The judge had 2 kids in the ring for a good 15 minutes(or at least it seemed like it) for the Jr. Showman. Andrew showed well on Tuesday but I don't remember his exact placing. Then the Dairy Show, let's see- Garrett & HAylee participated in the Pee Wee Showmanship contest and received blue ribbons. Then Robert and Andrew were in the same age group, Robert was 3rd and I think, Andrew was 5th. Then Andrew had his Guernsey, which ended up Grand Champion Guernsey. Both had Holsteins and they did OK, but not great. And then Robert had his Red & White which ended up as 4-H Jr. Champion and Reserve Champion. Now this was only the animals. Robert had a 1st on his small engine project& Foresty, a 2nd on his Embryology & Arts and Crafts Project. Garrett had first on his Shoebox Float, Rocket, and decorated bowling pin, 2nd on his Farm Display, his candy bar creation and a third on his painting on fabric. The 4-H Auction was where the boys did indeed shine, thank you to all the buyers that came to bid on their animals and a special thank you to Knox Country Farm Supply for purchasing Robert's Goat and Andrew's Hog!!It was a good fair with only 1 really wet day! 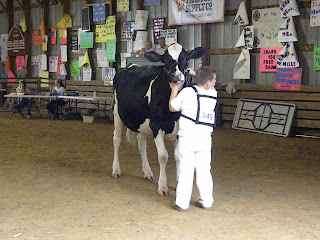 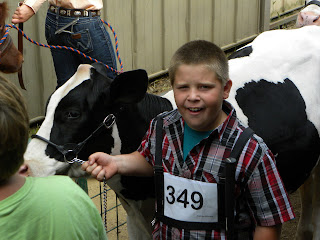 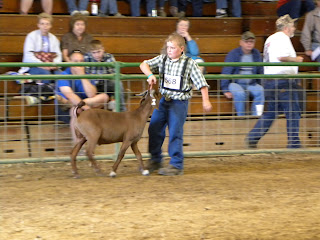 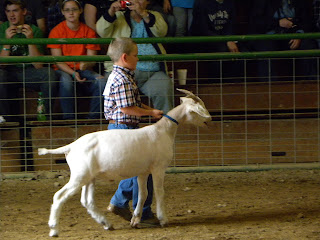