As we get ready for school around here, I label most everything - in case they would misplace it or temporarily loose it. But in the last couple of years, I have had problems labeling their backpacks because the inside lining was black. Nothing shows up on black. But this year Sharpie came to the rescue or at least it came to my mind. I purchased silver sharpies at Christmas Time and yes I still had them. I quickly grabbed the silver sharpie and wrote names right in the backpacks on the inside. It worked great so I grabbed the black pencil box and did the same. Yeah for Sharpies in silver - you can see them on black!!! It worked great for labeling stuff for school!
Posted by Schick fun ideas at 10:27 PM No comments:

The other day, the boys wanted to cook lunch, so I let them "cook" their own lunch. They decided that macaroni & cheese sounded good. So together they cooked the macaroni (asked mom to drain it) and then they added the cheese and stirred. I suggested that they try adding something to their Mac & cheese, that it could be their base, but maybe they needed to try changing it a little bit. After a little discussion, and looking through the cupboards and the refrigerator, they decided to chop up pepperoni and add it to their mac & cheese. They then put some on a plate and sprinkled oregano on the top. (as they were doing this they asked if I would put it on the blog - so I am)

I would like to present to you their "Peppy Macaroni & Cheese" 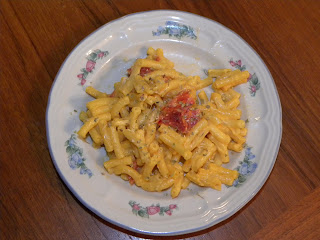 It was actually pretty good for what they started with - they decided that next time they would use more pepperoni!
Posted by Schick fun ideas at 10:18 PM No comments: 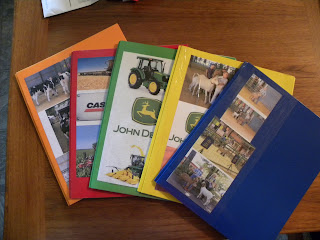 The boys had wanted fun folders this year for school, which I didn't have a problem with until we went to pick up our school supplies and there really wasn't things that the boys liked on the folders. (Robert did find 2 that had verses on them that he thought was cool)  So we discussed what we could do with the folders to make then fun and in the boy's  mind "cool." We picked up a few of the basic folders and brought them home. Well today as we were packing backpacks, they remembered that they wanted to "fix up" their folders. So after a few minutes on the computer. They had each picked out a couple of pictures from things they had done this summer and then (of course) we had to add a few tractor motifs. After we printed out each page on the color printer, we then cut them to shape and with a little Contact Paper, we attached them right to the folders. Now the boys have "cool" personalized folders to keep track of their papers this year, plus a great way to remember the fun they had this summer. Not only did this keep school shopping a little cheaper, it also made it unique - no one else will have a folder just like theirs!
Posted by Schick fun ideas at 10:11 PM No comments:

Spent today with my boys, my sister and her children and Nanny at the Crawford County Fair.  We had a good time looking at all of the projects and the animals. We also sat and watch the harness racing a little bit while we ate lunch. I also got to visit for a very short period of time with my dear friend Kellie. But it is always nice to take in a local fair at this time of year and take a look at the projects of the folks in the area.  We didn't need the rides, just the animals and projects for the kids to have a good day. The is the 2nd largest fair in the state, so it was much bigger than Venango and it has been a few years since we have made it up to the fair. If you get a chance take time and stop in, http://www.crawfordcountyfairpa.com/ check this link to look at the schedule of events and what all is happening at the fair.
Posted by Schick fun ideas at 11:11 PM No comments:

Well last week we were at the fair (for those who may not have known) we started the week in the rain and then Thursday for the auction, in the rain and then a little rain on and off Saturday, but that is standard fair weather.  The week started off with the Goat Show on Monday. To which Robert received Grand Champion Market Goat and Champion Breeding Goat. He also received Champion Fitter for Jr. Goats. If that wasn't enough, Robert received a 1st on his Genealogy 3 project, a 2nd on his Fire Safety project and a 3rd on his Small Engines Project. Garrett received a 2nd on his Farm Display, a 3rd on his pillow, a 1st on his shoebox float, a 2nd on his Christmas Ornament, a 2nd on his short story, & a 1st on his rocket. (there might have been a few projects that I missed, but I think those are the big ones:)

Tuesday was Hog day and this year we didn't have anything to show this day but watch nephew Andrew show his pig for the first time as a 4-H'er. He received 1st place in the weight class and a blue for showmanship.
Wednesday we continued to watch Andrew with his Dairy Beef, which he did well with and then it was Garrett's turn to Pull in the Pedal Tractor Pulls. He placed 3rd in his age division. You can watch him pull here (it is about a minute into the clip) http://www.youtube.com/watch?v=klkqIKgPgA0And That evening was the Dairy clipping contest, which Jr.'s can clip their animals and have someone give them clipping tips and pointers. So Robert clipped about 1/2 of has calf during the time frame and then we finished her up for Thursday morning.
Thursday was Dairy Day and the boys, Robert, Garrett & Andrew all sowed a dairy calf. Robert and Andrew were 4-H'ers and they both received blue ribbon in fitting and showmanship. Robert received the Jr Showmanship Award and Andrew received the Jr. Fitting Award - so they shared nicely if nothing else. In the type class, Robert placed 3rd in 4-H and 6th in Open. Andrew ended up with Jr Champion of the 4-H Show and Reserve Supreme Champion of the 4-H Show. Then on to the 4-H Livestock Auction where Robert sold his Champion Goat and it was announced that he had received Jr Supreme Livestock Project.


Friday was Farm Safety Day. The Farm Safety Club, (which Gary is a leader and Robert is a member) had farm safety demonstrations going on most of the day.

Saturday, needless to say was raining and we were tired and a little lazy, but we went to the awards and then once it quit raining we enjoyed the Frogfest with the radio station on the pulling track - bonfire included.
It was a busy, fun week. But it is over now and on to whatever is next.
Posted by Schick fun ideas at 11:37 PM No comments: