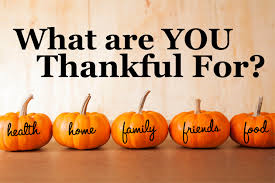 Today I had the Children's sermon and we discussed being thankful. In 1 Thessalonians 5:16-18, it says "Be joyful always. pray continuously, give thanks in all circumstances, for this is God's will for you in Christ Jesus." Wow- to be joyful always- I asked the kids did that mean even when we have to get up in the mornings when we would rather sleep in and pull the blankets up over our heads? Yep it does- we should be joyful! How about when we trip playing tag outside- should we be joyful then? Yep even then according to the Bible it says always. Now we have a very special day coming up that a lot of stores appear to have forgotten is even a holiday, so what is that holiday? Thanksgiving! Right! Now the last part of the verse says "to give thanks in all circumstances.
' So who has ever gotten in trouble and been punished? Maybe a time out, or grounded or a spanking? (to which some raised their hands). Now how many have thanked their parents for being disciplined? Wow to be thankful in all circumstances? This could be difficult! So what is your least favorite food at Thanksgiving? I had several answers, like stuffing, cranberry sauce, that purple stuff, etc. So the Bible is telling us to be thankful for cranberry sauce? Yes because we have food to eat- it might not be what we want to eat, but it is food and many children do not have what we have. How about when we have chores to do, should we be thankful then? Yes, because if we have dishes to wash, then we have had food to eat. IF we have laundry to put away - then we have clothes to wear. And if we have a bed that needs made then we must have a bed and a place to sleep. These are all things that we need to be thankful for because in all circumstances we are to be thankful. So this week while we are celebrating Thanksgiving remember to be thankful for even the food that you don't like! And to be joyful at ALL Times! And we closed in prayer
Posted by Schick fun ideas at 6:29 PM No comments:

I'm so proud of my kiddos! They spent Saturday promoting a program that is dear to their hearts- 4-H! Both Robert and Garrett presented demonstrations to mall visitors, answered questions and handed out promotional items. They both entered posters into the annual poster contest and waited for the Awards ceremony to see if they had earned any scholarships!  Well it turned out to be a great day and night!

Garrett earned 2nd place with his poster, and Outstanding Jr.4-H'er plus 1/2 scholarships to In-Betweeners weekend, Jr. Camp and Livestock Camp!


Robert earned Outstanding Market Goat Project Book, Outstanding Engineering Project Book (small engines) and then 1/2 scholarships to Teen Leadership Conference, Teen Leadership Weekend, Intermediate Camp, and Livestock Camp!
On top of all of that their club earned 2 awards for their display and their public relations! We are bleeding green here!
Posted by Schick fun ideas at 3:44 PM No comments:

Fishing and Sewing Kits and a few more 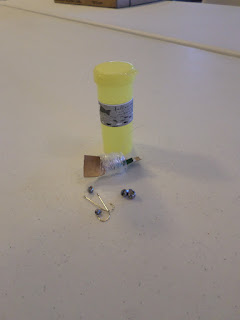 We continued to make things for in our Operation Christmas Child Shoeboxes and putting them into some type of kit. Making kits kind of spreads the cost around and makes it that it's not quite as expensive. We purchased a roll of fishing line, a large package of hooks and some lead weights. We then rolled smaller amounts of fishing line onto cardboard, took a couple of hooks and weighs and dropped them into a small bottle- a pill bottle would work great too!  We used the same bottles for a bead kit (I forgot to take a picture) We took cording and rolled some off for each bottle and then filled with assorted colored beads. The girls could make bracelets, necklaces or they could use the beads in their hair- it 's up to them! 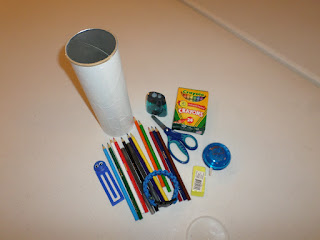 We decided that maybe creating a school kit would be great, but we wanted to make some type of container for the children to keep their supplies in. So we took a Pringles Potato Chip can, wrapped it with contact paper and then filled it with school supplies. Crayons, colored pencils, scissors, pencils, pens, sharpeners, erasers, a bookmark, and a bracelet and a yo-yo. You would be surprised what can fit into those cans and the cans fit perfectly into the Operation Christmas Child Shoeboxes! 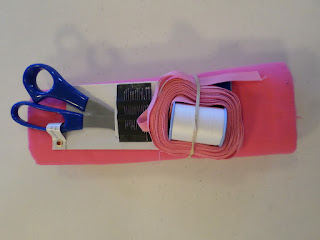 And then finally we made some sewing kits! Each included at least 1yard of fabric, a pair of fabric scissors, a card of needles, a spool of thread and some coordinating ribbon, what good is a sewing kit without the fabric! I'm thinking that next year I'm going to be watching for buttons to add to these too!
Posted by Schick fun ideas at 3:29 PM No comments:

Okay adding a family member this year has made things a little bit tighter, but we have been planning and saving items and purchasing things when they are on sale for Operation Christmas Child.  If you don't know about Operation Christmas Child here is a longer post on what it is and our family's involvement,
http://schickfunideas.blogspot.com/2014/12/operation-christmas-child-2014.html

http://www.samaritanspurse.org/what-we-do/operation-christmas-child/
﻿﻿﻿﻿
﻿
﻿﻿﻿﻿﻿﻿﻿ This year, now that we have been to the distribution Center, we are looking at things a little differently. How can we use what we have that we don't use to help others? What things do we use everyday and take for granted? How can we inexpensively put together items that would be needed/ used into our boxes?
﻿﻿
Well who doesn't have writing paper, notebooks, tablet paper, etc that they haven't used or have tucked away somewhere. What about those over flowing cups, baskets, draws of pens and pencils? Are some of those still new? Never been used pencils? Well today I took a whole pile of writing paper that I haven't used in a while (email is faster) and then I sorted through our pen/pencil baskets. I checked all of the pens to make sure that they wrote, I checked the pencils to see if they were new, (never sharpened) or nearly new  (just sharpened once) and I checked the erasers to make sure they weren't crunchy( you know that type that have sat too long and are hard). I also found a box of erasers that they boys had collected over the years, and I started putting together writing kits for in our Shoeboxes. I didn't really have any financial input into it- I just put to use what is already in my house, that someone else can use.

And here are my writing kits!

Posted by Schick fun ideas at 12:46 PM No comments: