At the book fair the other night, Garrett bought the book "The Very Hungry Caterpillar" after reading the book, Garrett and I decided to make a puppet for the book. (He is really big into puppets right now.) We took one of Dad's old socks and colored it all different colors (we used sharpie markers- a little messy but works well). I printed pictures of the things that the caterpillar ate from the book on cardstock paper. I cut a mouth in the sock and added a little pocket for the food to go into so it wouldn't fall out the other end of the sock. We glued googley eyes on and now we have a Very Hungry Caterpillar Puppet so as Garrett listens to the book he can also act it out or he can retell the story with the puppet to someone else. This has been a fun book activity.
Posted by Schick fun ideas at 2:34 PM 2 comments:

Thursday Robert didn't have school and Friday he had a delay. As dumb as this sounds, I enjoy snow days as much as the kids do. I try to take it as an extra day with the boys and we usually find all sorts of things to do. Now that Robert is in Cub Scouts and 4-H, he always has something that he could be doing. We took this opportunity. One thing he needed to do was build a model display. So we went to the basement and found a piece of wood, he measured and drilled the holes that he needed. Then he sanded and painted the board. He put dowel rods pieces into the holes and now has a model rocket display board, which will keep his rockets from falling off the shelf. Garrett and I worked on his wooden clothes hamper that I am making and he sanded some of it for me while Robert was working on his stuff. Robert worked on his goat project book for 4-H and Garrett and I started a "snowman project" We took an empty cereal box, pulled the seam apart and put it back together with tape inside out. Then I gave him, white paint and his paint shirt, and let him go to it. Currently we have the box painted but haven't finished the face for our snowman. I always try to have little "projects" around for the boys to do on a snowy day.
Posted by Schick fun ideas at 2:25 PM No comments:

I have been collecting a bunch of used candles that have been around my house. After Christmas it seems that there are a bunch of parts and pieces of candles or ones that the wicks are gone. Yesterday I took an old pan and create a double boiler. The pan was 1/3 full of water and the jar of near empty candles I sat in the middle of the pan. With the heat on, I carefully remelted the odds and ends of candles and then poured them in layers into new jars. For the wicks, I had picked up some wicking at a craft store and I used a nut from my husbands tool box as a weight at the bottom of the jar. Empty cherry jars and small pickle jars sometimes have fancier glass areas, or for a country style, canning jars work great. Just make sure that your wick is long enough to either tape to the top of the jar or wrap around a stick across the top of the jar. I was able to eliminate 4 jar candles that were used as far to the bottom as possible and several candle sticks and ended up with 2 new jar candles in cool layers that will look great and will last a while. Please be very careful with open flame (if you have a gas range) or id you are doing this with small children around (I did this while GArrett took a nap!)
Posted by Schick fun ideas at 2:25 PM No comments:

When we went on vacation this summer, we did some research on the National Parks. At the parks, they have a great program called "Jr. Ranger" this is a free program and the kids have to find answers to questions about the park, but they also get to be a Jr Ranger and receive either a badge or a patch. We found that there is a "Web Ranger" program online. This is fun for the kids, but also educational and they find out about National PArks that in the future you might want to visit. The website is www.nps.gov/webrangers This is a cool website- if you and your kids get a chance to check it out then have FUN!
Posted by Schick fun ideas at 6:51 PM No comments: 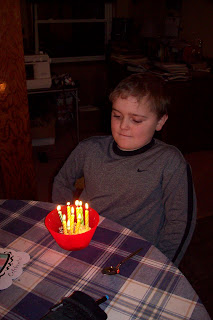 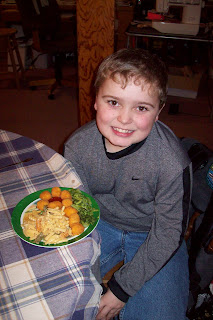 Yesterday, Robert turned 9! We had just us for supper and we will have his birthday with the rest of my family on Saturday. For supper I made a #9 out of the chicken nuggets (he requested them) and then he had Penn State Ice cream with his candles in it. We improvise sometimes. Happy Birthday Robert!
Posted by Schick fun ideas at 2:15 PM 1 comment: 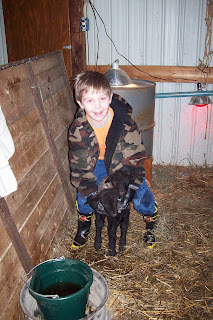 On Sunday, Andrew (my nephew) called he had baby sheep. Here is Andrew with his 2 new sheep. The sheep and the lambs are doing well. Congrats Andrew!
Posted by Schick fun ideas at 2:12 PM No comments:

Garrett in the paper 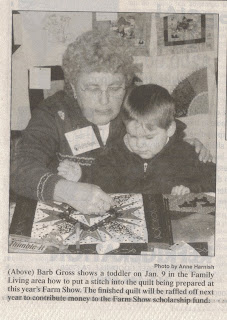 Garrett was in Last week's Lancaster Farming newspaper while at the Farm Show. He is sitting on a friends lap, Barb Gross, while putting in a few stitches into the Farm Show quilt.
Posted by Schick fun ideas at 7:29 AM No comments:

In yesterday's Children's sermon, I focused on committment. I did have some help to start the children's time, as I had spoke with the worship leader and asked that she invite the children forward and then start looking around for whoever was to be doing the children's sermon. I acted as if I didn't realize that I was suppose to do the children's time. I did have one wonderful person speak up and say that she would do something, to which I stood and pointed out that my name was in the bulletin and it appeared that I had forgotten.
I then went forward and spoke with the children. I asked them if they knew what a commitment was. They didn't, but they did know what a promise was. I asked them if they had ever promised to do something. Then asked "have you ever broken your promise?" Like maybe "I'll clean my room. I'll do my homework as soon as I get back. I will pick up my mess tomorrow, etc" Then I asked if God had ever made a promise. They answered "Yes" "What?" was my question. Unfortunately they couldn't come up with a promise but the adults did. "I will never leave you nor forsake you" and "I will be with you always." I explained that I am a rainbow chaser. I go out anytime that it is raining and the sun is shining to look for the rainbow. So what promise does that beautiful rainbow remind us of? Then they came up with that God promised to never destroy the world by flood again. Now I did remind them that God did not say that he wouldn't destroy countries or cities by flood, but that he would not destroy the world by flood.
So has God ever broken a promise? They answered "No" so he has gone to heaven and is making a room for me? "yes" was their reply. So aren't we to try to become more like Jesus each day? Then shouldn't we be careful of what we promise to do? If we don't plan on following through, should we promise to do it? We need to make sure that when we say we are going to do something that we do it. First because we said that we would, but second because someone is depending on us. And finally, if we have made that "commitment" then we need to follow through and try to be more like Jesus and God by not breaking our promises.
Posted by Schick fun ideas at 8:35 PM No comments:

Today was warmer and sunny here, so the boys and I went for a walk down the road. On the way back they enjoyed playing "Shadow Tag." For those who do not know what shadow tag is -try it sometime. On a sunny day, go for a walk or out in the yard, and play tag, but instead of touching someone to tag them you have to step on their shadow. When you have been tagged you are now it and you try to step on someone else's shadow. THis can be a lot of fun and requires nothing but the sun and space. This is great with Groundhog Day coming quickly. Garrett is now understanding this game and really enjoyed stomping on Robert's head!
Posted by Schick fun ideas at 8:40 PM No comments: 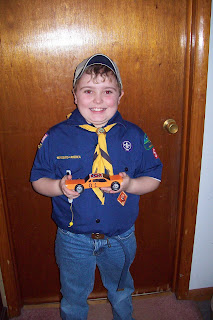 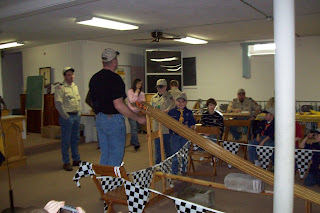 Today was an exciting day in the Schick house, the Pinewood Derby. This was Robert's 3rd year to race in the derby and this year's car was the General Lee from the Dukes of Hazzard. AFter 14 races, Robert ended up in 5th. He had a good time and his den did very well with 2 of the winning car coming from Den 6! Nice job!
Posted by Schick fun ideas at 8:25 PM No comments:

Beginning of our blog

I was inspired by a friend to try writting a blog as a way to share some of the fun and creative things that I do with my children. Craft ideas, recipes in the kitchen, gifts and projects will be part of this blog. Since I often do the Children's sermon at our church, I thought I would share those ideas too. (I don't usually get those from a book or anything - they just come to me at weird times.) Then there might be photos of the things that my boys are doing and random other fun ideas. I hope that this works and that I can share some of these ideas with others.
Posted by Schick fun ideas at 12:15 AM No comments: