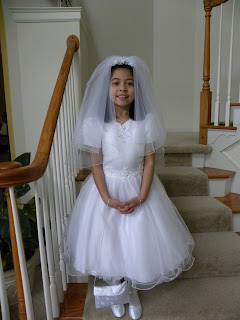 This past weekend, we had the priveldge to watch Elizabeth take her 1st Communion. She was a beautiful young lady for this special day. We also had fun seeing relatives and friends that we haven't seen in a while.
Posted by Schick fun ideas at 2:27 PM No comments:


﻿﻿ ﻿﻿ This past week has been a busy one for Robert. He had his first Band Concert since he started taking lessons for trumpet in September at the school. They had their Spring Concert on Thursday evening. For only a few months of lessons, these kids have learned a lot! They played several songs and they did a fabulous job! Robert actually played 2 parts. As he played trumpet for all but 1 song. Then he became a percussionist and played clavas for 1 song. He was very excited!

He also entered the School's Art Show which is the 4, 5,& 6 grades. He entered 2 of his Urkainian Eggs that he made this Easter. He didn't place, but maybe next year. There are a lot of excellent artists at Keystone.

In both events, we are very proud of Robert!
Posted by Schick fun ideas at 9:49 PM No comments:

Garrett is my birdwatcher.He is always pointing out the birds and I'll hear "Sh, we dont' want to scare the bird" But he has an exciting project that can our way. There is a Robin that has nested in the playset. So the other day we went up and looked in and there were 4 eggs. So we have been watching the eggs and so far 3 of them have hatched. He is so very excited that there are baby birds at the playset.

But we also have a Great White Egret that is hanging out in the pond near our house. So we had to come check our bird book and when we didn't find what we were looking for we went on line. We found a great site from Cornell University that has all sorts of information about birds. You can search them by name and hear their song. You can check their habitat, the breeding habits and their standard menu. If you would like to take a peek at the site here is a link http://www.allaboutbirds.org/
So take a look at the birds around your house, put out a feeder and enjoy the beautiful colors that you will find! Garrett loves it!
Posted by Schick fun ideas at 6:54 AM No comments:

Sorry all, but the sun has started to shine at our house and that has meant "get OUTSIDE!" So I didn't blog recently so I regret that I didn't wish everyone a Happy Mother's Day. I hope that if you are a mom, that you had a very nice day yesterday. The boys treated me well here! But something that we start doing on Mother's Day is that we tend to take a few more back country roads and watch for wildflowers. The trillium have started near my house and I am hoping to go looking for the Lady's Slippers sometime this week! But this time of year always has beautiful flowers regardless if they are wild or domestic. So take a little time from your schedule and stop and look at God's creation and remember that if he takes care of them, he will take care of you too!
Posted by Schick fun ideas at 6:47 AM No comments:

Garrett has been having problems with getting the correct shoe/boot on the correct foot. I am always having to have him change his boots around. So yesterday i remembered a little trick that I had done with Robert. I took a permanent marker and put a little dot on the inside of both his boots. Now to get the boots on the correct feet, he has to first make the dots kiss (or put them together) then put on his boots and they will be on the correct feet. Just something simple, but it saves a lot of frustration and a little bit of time.
Posted by Schick fun ideas at 6:43 AM No comments:


It was once again drive in movie night at Kids Klub at our church. This year Andrew has joined Kids Klub, so this was the first time that he got to go to Drive In Movie night. I know that he has seen Robert's cars from past years, but he got to build one and go to the movie too. So Robert built a black race car and Andrew built a truck like his Dad's milktruck. Both boys seemed to have a good time as did the other kids in Kids klub. This is such a great activity for the kids and they really enjoy it!
Posted by Schick fun ideas at 10:11 PM No comments: