This year the Venango County Fair was open over 2 weekends so we were there a few days longer than last year. This made the schedule a little different, but change is good! We started the week pretty well- Andrew showed his hog first. He did a great job showing and made it for the 2nd round of showmanship! Haylee also showed a pig! 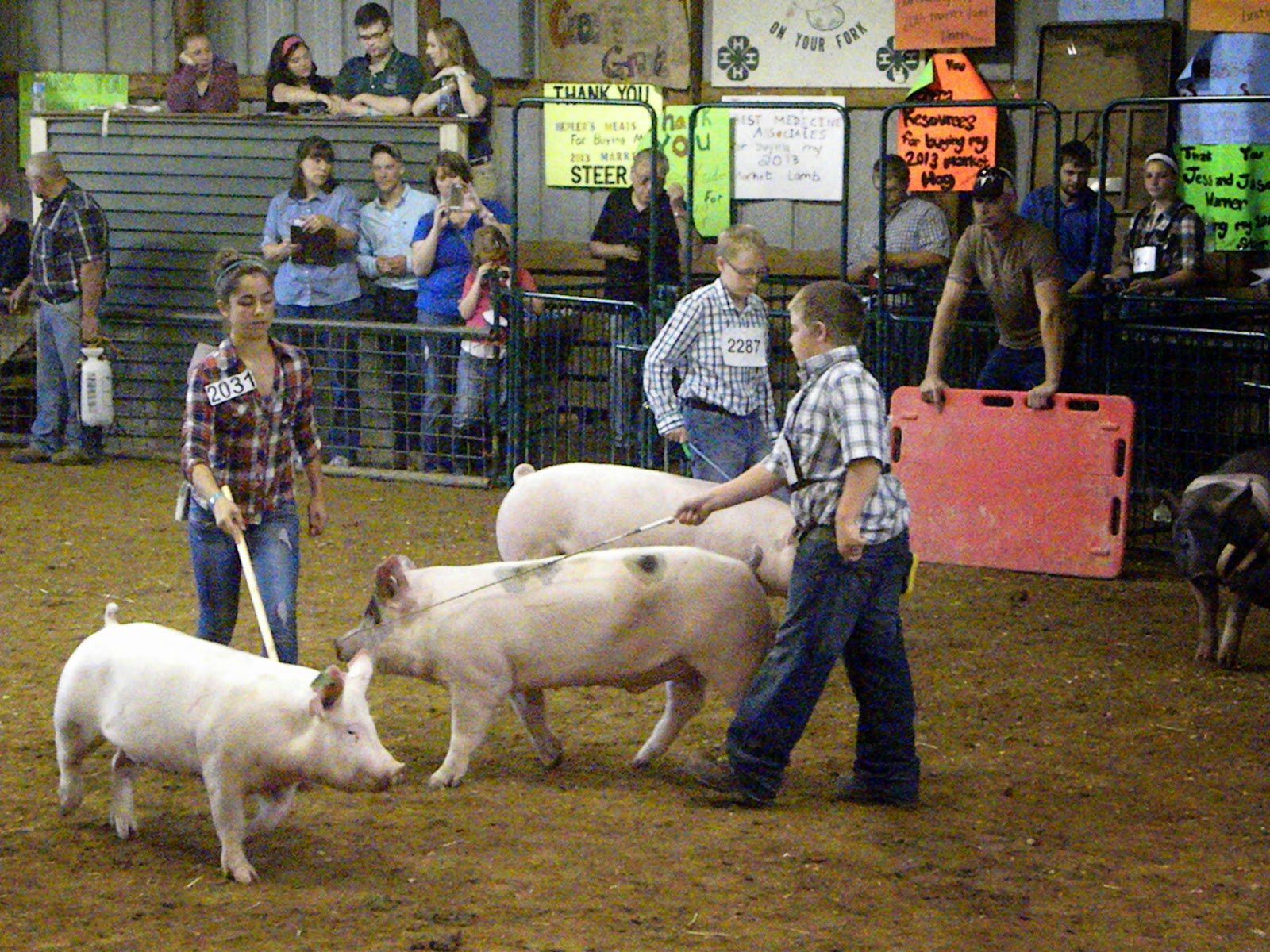 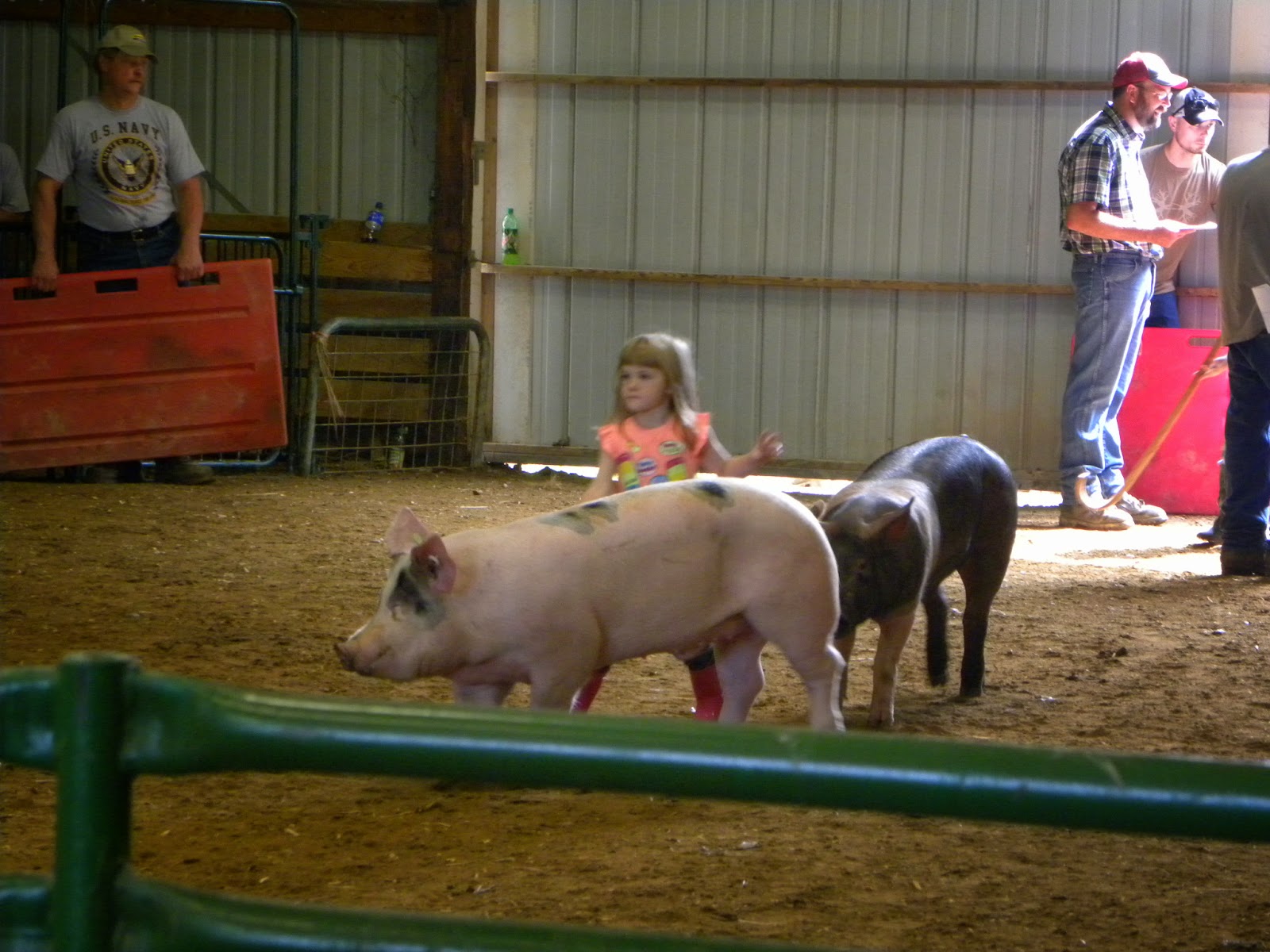 Robert and Garrett showed their goats Tuesday evening(first time for an evening show in a very long time) but it seemed to go really well. Robert placed 2nd in his market class and had a very large showmanship class. Garrett entered his goats in the breeding classes. The only problem was that Ellie got too tall for him and her horns were right at Garrett's eye height, so he and Robert traded which goats they were showing. Garrett had Shamrock and Missy (Robert's goat) and Robert showed Jas and Ellie (Garrett's goat).

Then Andrew was in with his beef project and he showed her very well especially for his first time showing a beef project. 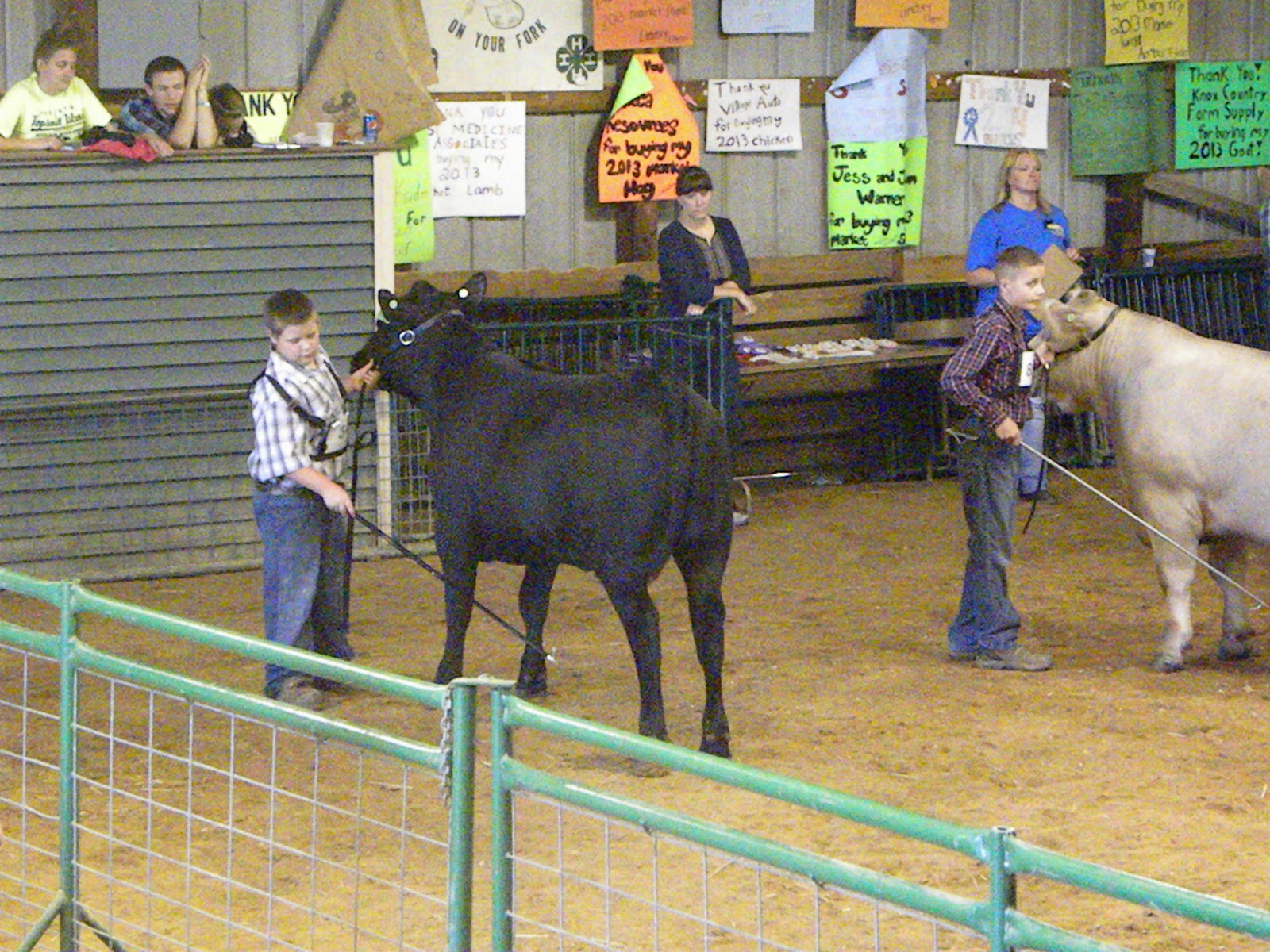 Wednesday afternoon was a big moment for Garrett, it was his last year at the Pedal Tractor pull, he was 8 and that is the cut off. So he and Haylee both participated in the pulls. Unfortunately Garrett didn't pull quite far enough to get the trophy that he wanted. He won 3rd place in the 8 year old division, 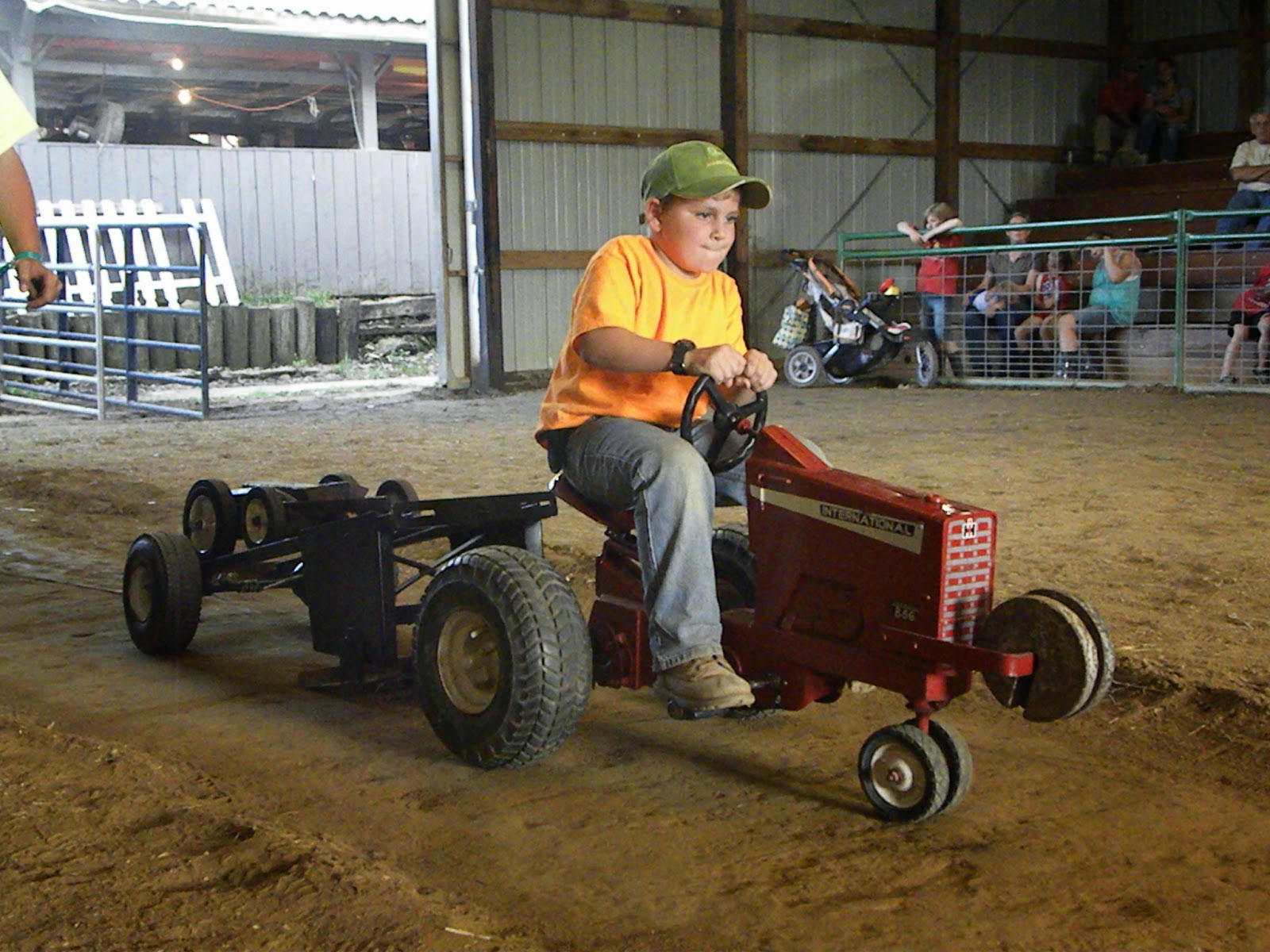 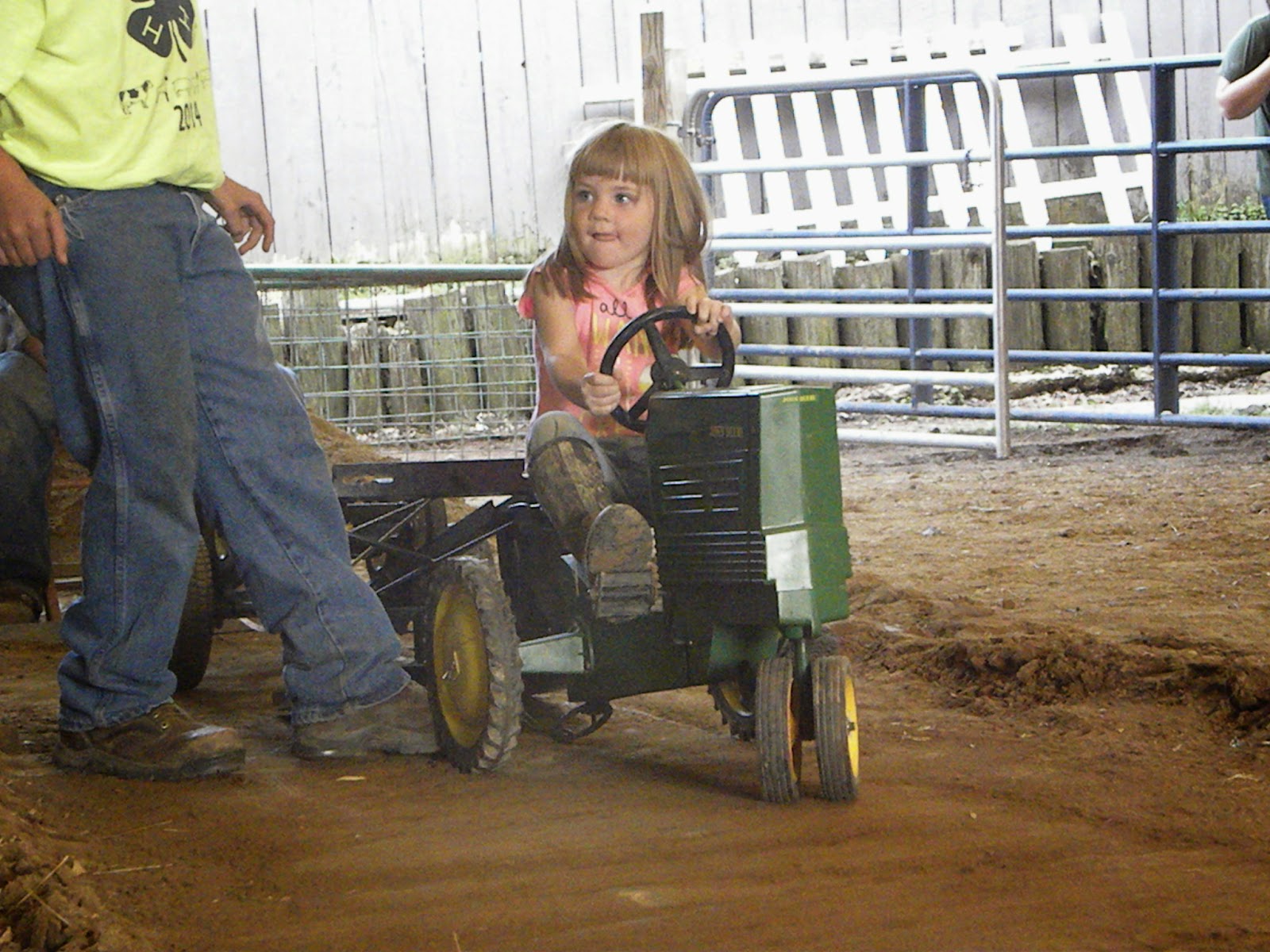 Thursday everyone was busy - this was Dairy Day-  Robert had 2 calves, Andrew had 4, Garrett showed one of Robert's and Haylee found one to show too! Robert ended up showing more than just his own animals which was fun to watch him step up to helping others and animals that he might not know as well as his.  Robert received Outstanding Intermediate Showmanship. Andrew won Grand Champion Guernsey and Garrett and Haylee both received blue ribbons in the Pee Wee showmanship.

Thursday ends up being a very long day for the kids because when they are done showing they then have to get ready for the Livestock Auction. Robert and Andrew both did very well with their animals in the sales ring. 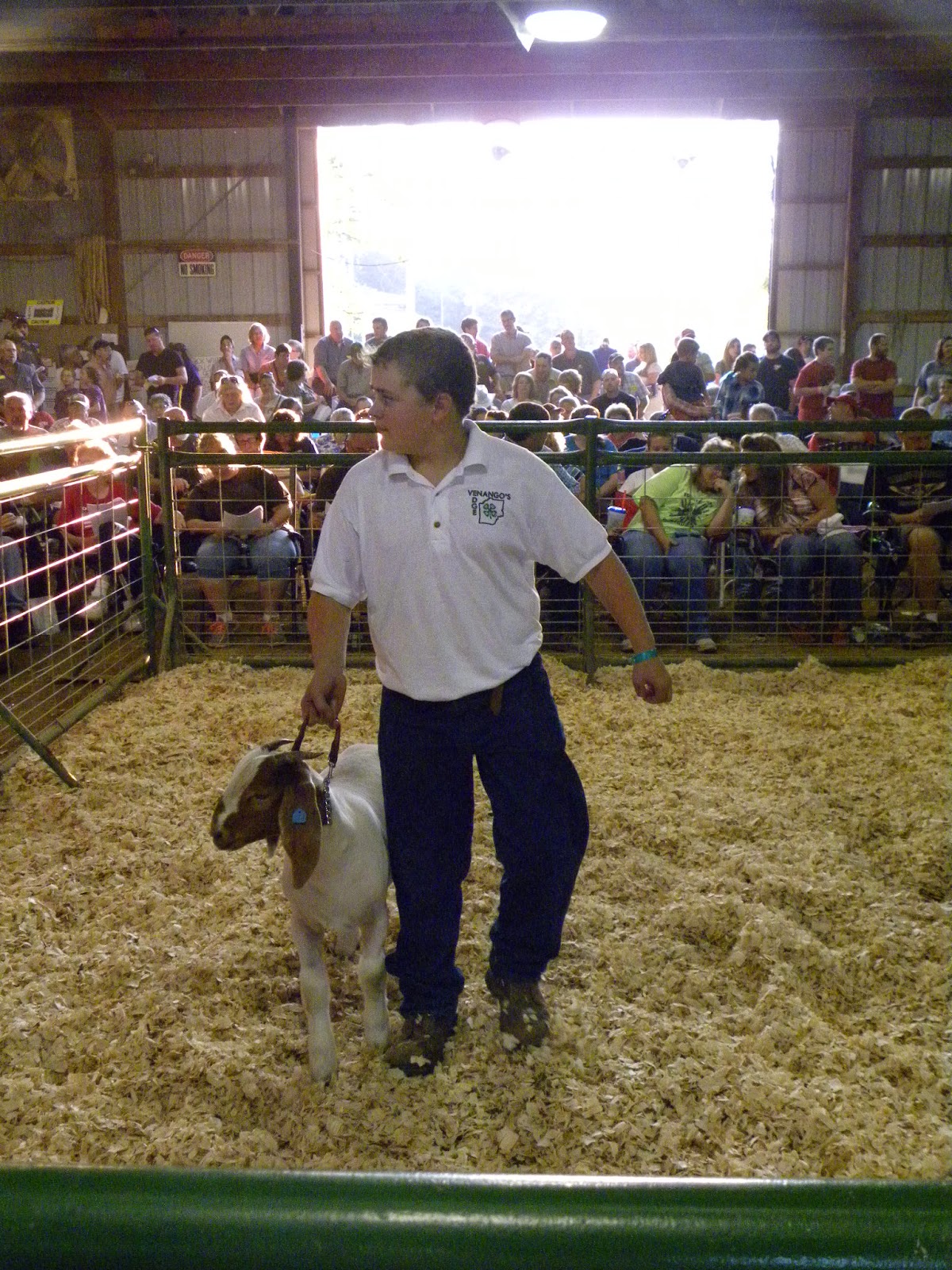 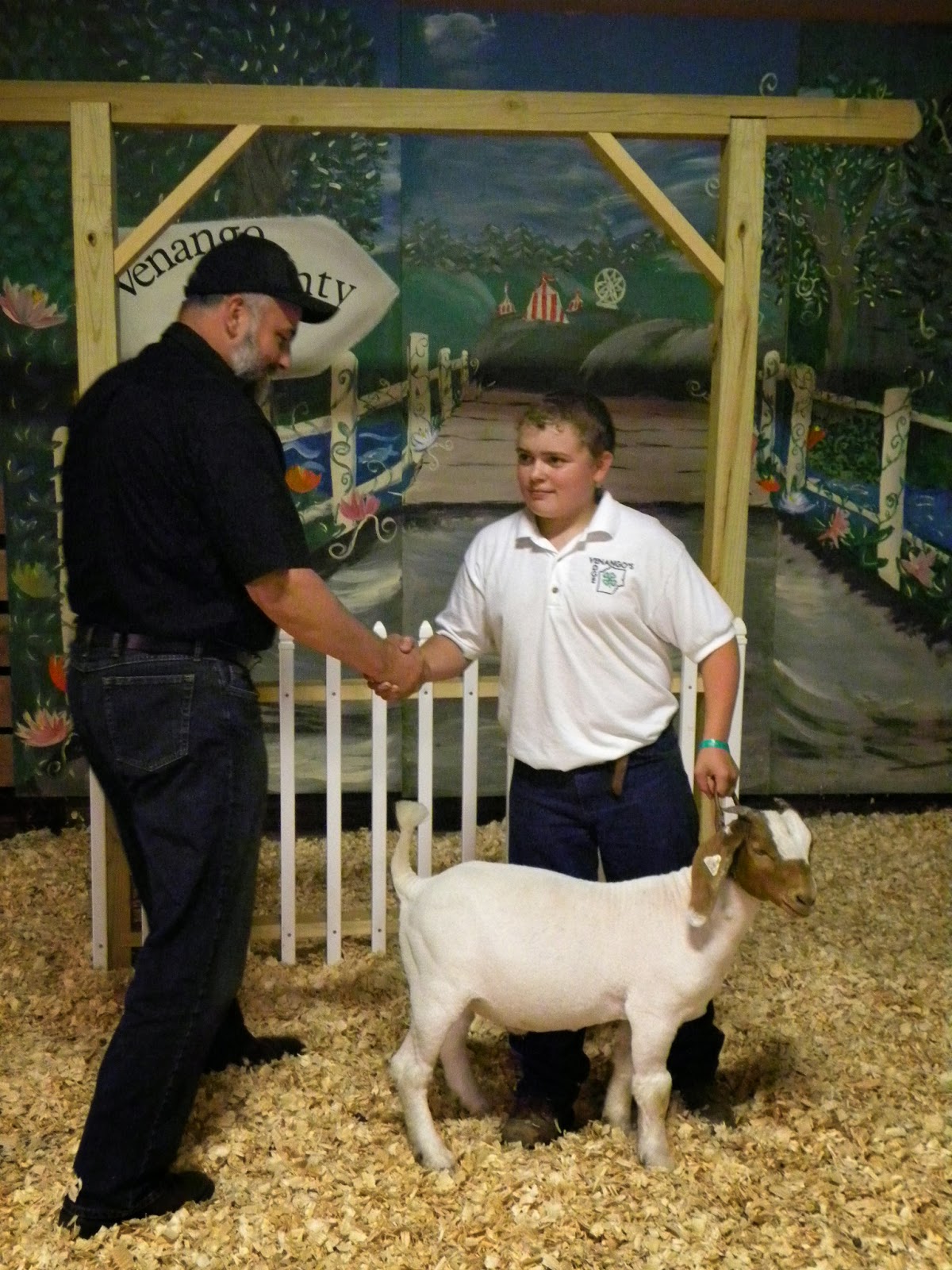 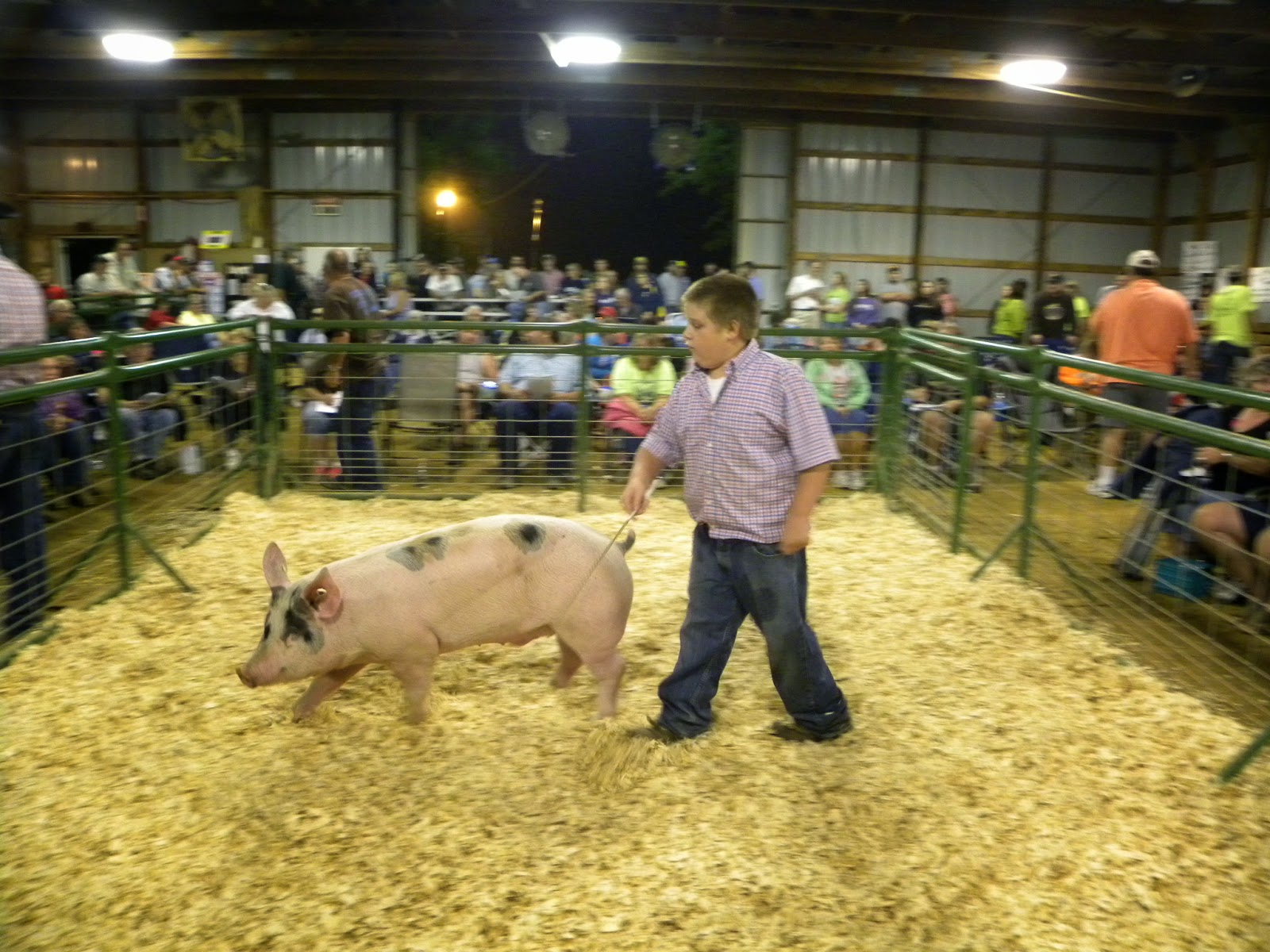 Friday was a pretty slow day the kids just waited for the Tractor Pulls. But then Saturday came along and with it came Robert's first Garden Tractor Pull. The first pull was 47ft, but something wasn't quite with the tractor so he is still working on it for next year.

Saturday afternoon was the award ceremony and you can tell that the fair was wearing them out when you make them sit for to long and you find them looking like this... 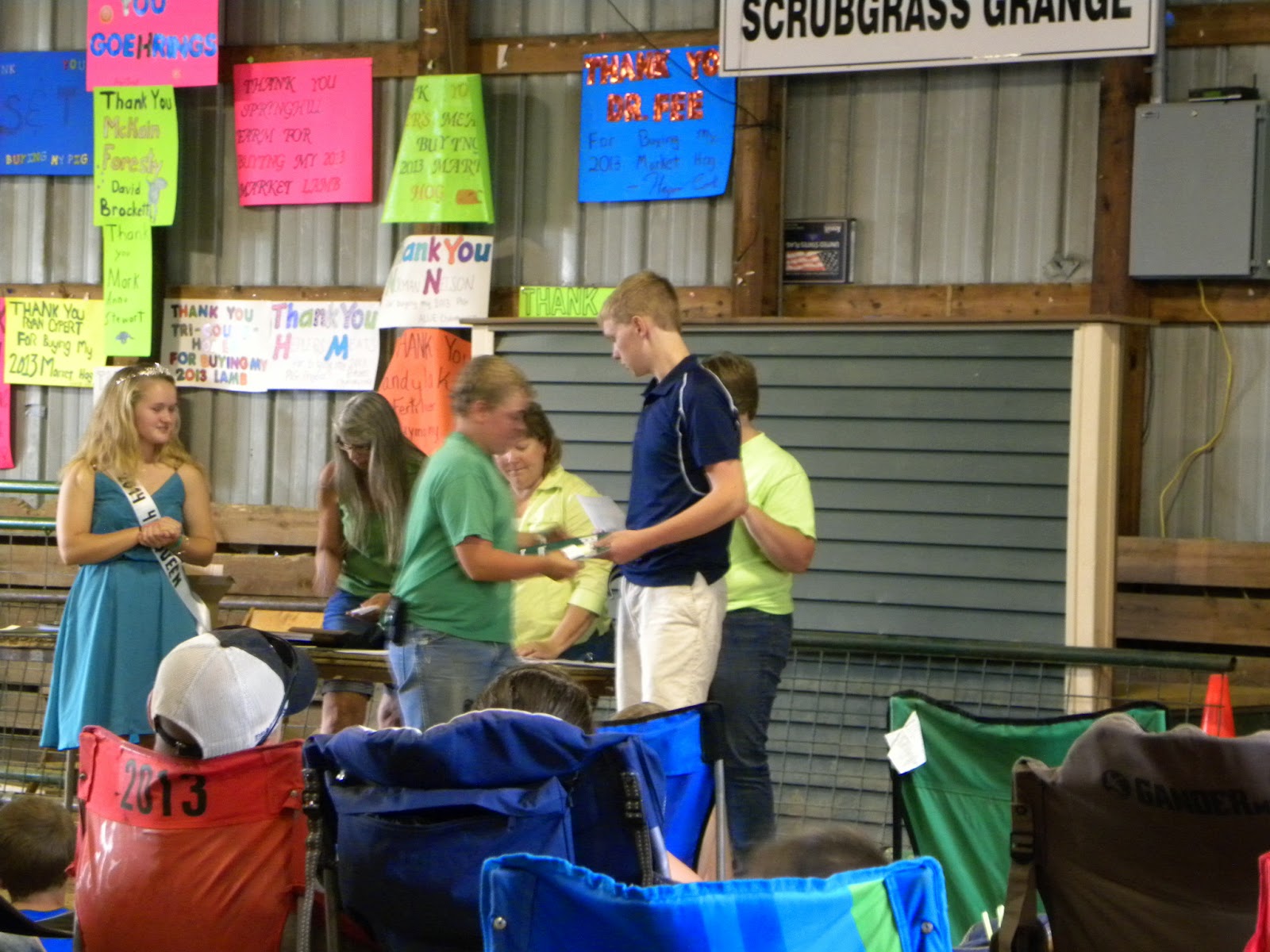 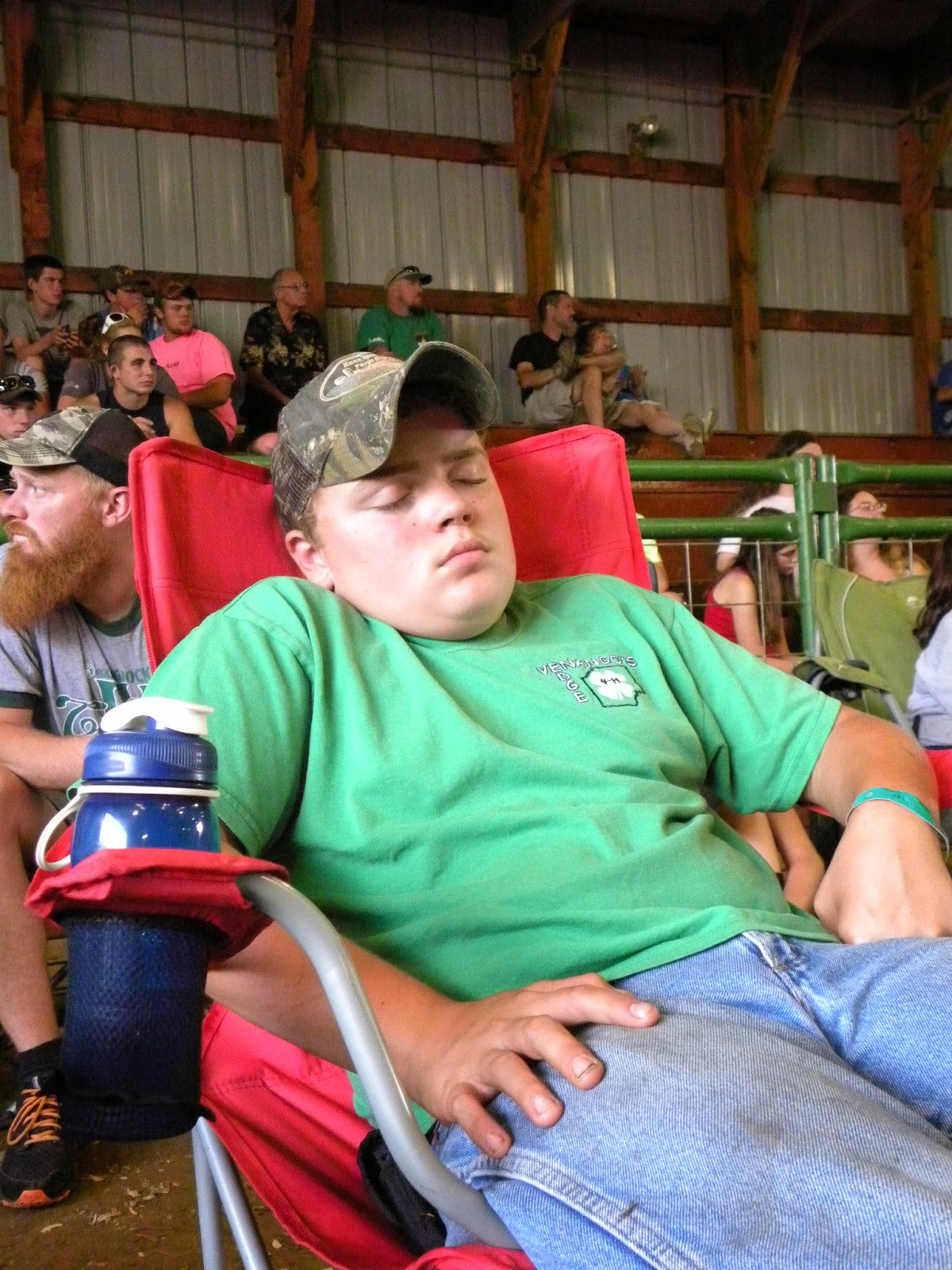 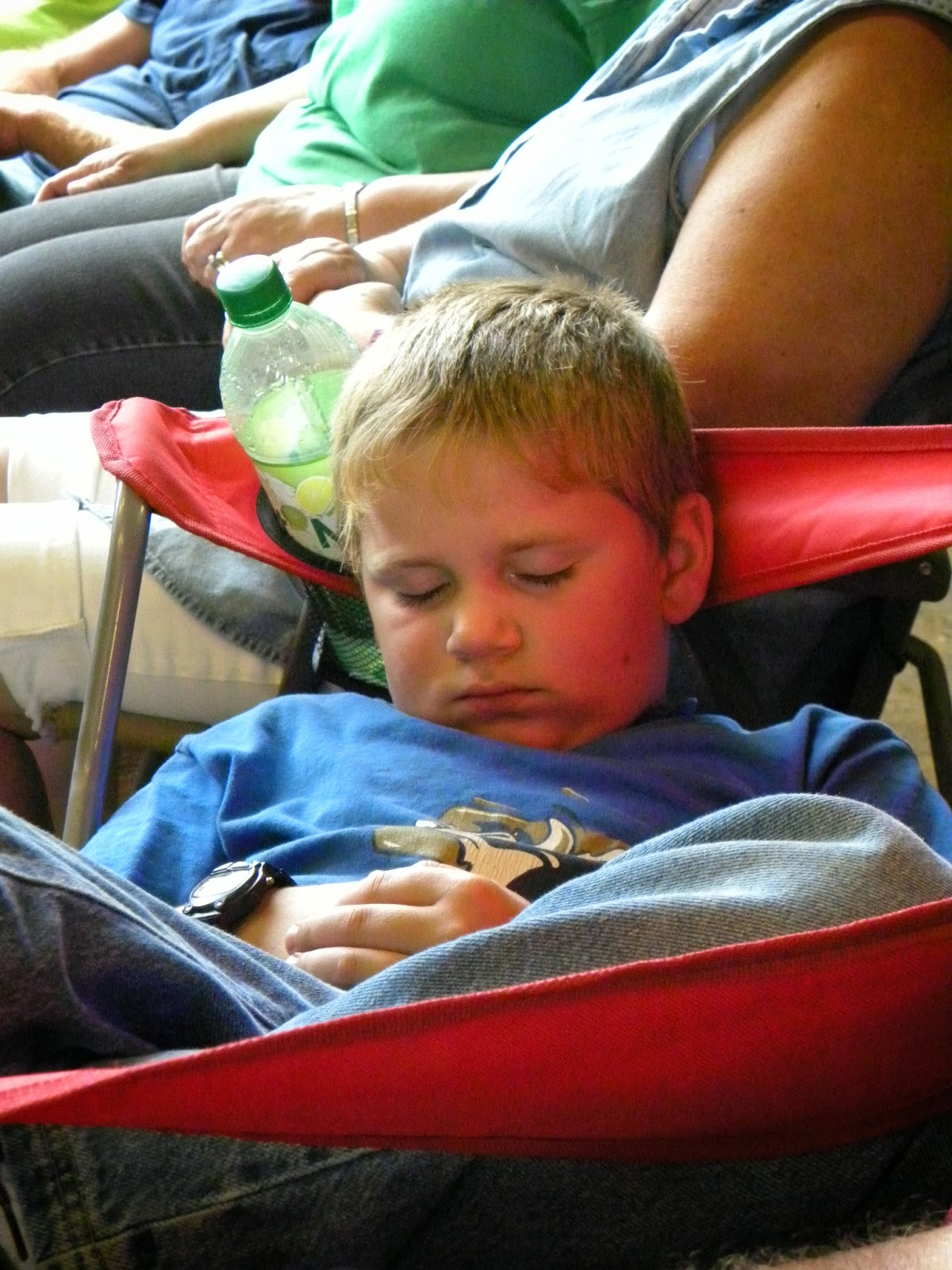 And the fair closed with a demo derby and then for the first time fireworks. Jimmy was in charge of the kids in their prime seating on top of the ice cream booth.

The boys had other projects besides the animals and they placed on some and not on some others, but it was once again a great family time at the Venango County Fair.

Apparently our summer got out of control this year and blogging was not a top priority, but I will at least try to sum up our summer a bit. We started with Weird Animals VBS at our church. Robert was old enough to be a helper for the first time and Garrett and Haylee(my niece) both got to attend. We had about 87 youth attending throughout the week and had a great time. Garrett and McKenna sang a duet for the closing program- I was so proud!

Part way through that week, Robert and Andrew (nephew) packed up and was off to 4-H Camp. Sounds like they had a good time with 4-H'ers from around the Region.

Everyone was home for a few days and then off to Livestock Camp. I was a chaperone so Garrett got to attend camp too. He was very excited about that!

At the end of June, we said goodbye to Leroy(Andrew and Haylee's great grandpa). This was difficult for all as he influenced the kids and picked on all of them. This happened while Robert was at Boy Scout Camp, but we made arrangements.  Robert was "tapped" for the Order of the Arrow at camp. We were able to attend that ceremony- it was pretty cool!


Garrett turned 8 at the end of June which seems hard to believe that he is now old enough to officially be in 4-H(he can hardly wait!) The following weekend we had a party for Haylee's birthday, to which she feel asleep to her private fireworks this year.


We spent the 4th of July weekend painting the barn at Gary's folks place to prepare for their move this fall.


Then off to Cub Scout Day Camp for a week and yes I was a chaperone there too! We had a good group of scouts with us and they did very well with BB's and archery, crafts and nature.

Robert was back to Custaloga Town in July for his Order of the Arrow Ordeal. He passed and was brought into the Langundowi Lodge #46.

And that brought us to fair preparations and the Venango County Fair Which will receive it's own post or two
Posted by Schick fun ideas at 9:40 PM No comments: